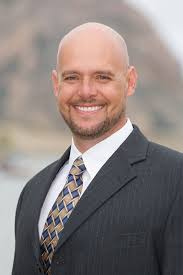 Jason relentlessly pursues excellence in everything he does.

While serving his country in the military, Jason was awarded the Army achievement medal for his time in Berlin, Germany.

While in college, Jason went from a walk-on football player at a small Division II school to a three-time All-American and current NCAA record holder. Next, he was invited to the NFL combine and went on to sign two NFL contracts (with the Buffalo Bills and the NY Giants).

Jason’s interest in numbers and passion for finance influenced his career. He started with Wells Fargo Financial where he helped clients plan for everything from small personal loans to home mortgages. Jason left Wells Fargo Financial to offer more extensive options to his clients and apply his passion as an independent Mortgage and Financing Consultant. Currently, he has partnered with Central Coast Lending to offer his elite level of service to the Central Coast.

In his business career, Jason pursues the same elite level of excellence as in the rest of his life. He continually hones his expertise and stays on the cutting edge of the mortgage market and rate-lock timing.