Posted at 15:58h in CCL Market Updates by admin 0 Comments

The National Federation of Independent Business small business optimism index declined 0.5 points to a seasonally adjusted 107.4 in October; a four-month low. The biggest declines of the ten components that make up the index came from questions on expansion and earnings trends, while the only gain cam e from the plans to increase inventories. The October report sets the stage for solid growth in the economy and in employment for the fourth quarter; while inflation and interest remain historically low.

Americans paid more in October for gas, rent, and used vehicles; triggering the biggest increase in consumer inflation in nine months. The consumer price index increased 0.3% in October marking the largest advance since the beginning of the year in January. This increase matched economists’ polled predictions. The increase in the cost of living over the past 12 months rose as well to 2.5% from 2.3%. the rate of inflation is still below a six year high of 2.9% set three months ago. The measure that strips out food and energy, or core rate, edged up 0.2% from last month. The yearly increase to this core rate is closely watched by economists, dipped to 2.1% from 2.2%. That’s the smallest increase since April. Higher gas prices accounted for more than one third of the increase in consumer prices last month. The falling price of oil is likely to result in less pressure on inflation in the next few months. However, the cost of rent, used cars and trucks, medical care, home furnishings, and car insurance increased as well. These are all major household expenses. Prices for new vehicles and communication declined. After adjusting for inflation hourly wages slipped 0.1% in October. They are up 0.7% on an annual basis. Inflation has forged higher this year largely owing to a strong economy that has raised the cost of labor and many key materials. US tariffs on billions of dollars of foreign goods have also contributed to higher prices. Inflation remains stable, however, with the recent pullback in oil prices consumer inflation could ease for some time. This would allow the Federal Reserve to proceed with its strategy of gradually raising US interest rates. Some economists believe inflation could consistently exceed the Fed’s 2% target by next year; this potentially will put more pressure on the central bank to become more aggressive. The rebound in CPI inflation to 2.5% in October from 2.3% was mostly driven by a rise in gasoline prices which will be more than reserved over the next couple months. The rest of the report supports the view that underlying inflation is unlikely to rise much further from here. 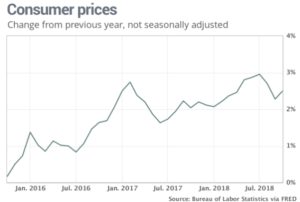 The number of Americans who applied for unemployment benefits in mid-November rose slightly but still remain near historic lows. Initial jobless claims, a rough measure of layoffs, edged up 2,000 to 216,000 in the week ending with November 10th. This was a little above the forecasted 210,000 claims by polled economists.  The monthly average of new claims also increased, up 1,500 to 215,250. New jobless claims have totaled fewer than 220,000 for 19 weeks in a row, a remarkably long amount of time of low layoffs. They haven’t been this low since the early 1970’s and don’t appear to be rising much any time soon. The number of people already collecting unemployment benefits, rose for the first time in 7 weeks. They increased by 46,000 top 1.68 million. These continuing claims are also at the lowest level since the early 19710’s. The labor market is extremely tight, and it is hard for companies to find enough people to fill a high number of job openings. The labor shortage is helping workers to earn bigger raises. It is also bringing people back into the workforce who have been without jobs for a long time. Yet if the rising cost of labor triggers higher inflation it could mean higher interest rates and an eventual slowing of the  economy. 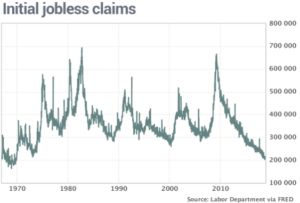 Sales at US retailers surged in October, but most of the money was spent on gas and new autos and the increase came after the first back to back declines since 2015. Retail sales increased 0.8% last month; compared to economists’ predictions of a 0.6% increase. This increase follows two small declines in both September and August. Initially sales rose slightly in both these months but in tits later estimate it revised the figures lower to the negative column. This could result in the government trimming the initially estimated 3.5% growth in gross domestic product in the third quarter. Sales jumped 3.5% at gas stations, mostly reflecting higher prices at the pump. More spending on fuel is not a good thing for households, but a recent plunge in oil prices signals that price relief is on its way. Sales of new cars and trucks increased 1.1%. When Americans spend more money on gas or buy big ticket items; overall retail sales rose a more modest 0.3% if gas and autos are stripped out. Department stores reported a 1.3% increase in sales and home centers saw a 1% gain. Sales fell for restaurants and stores that sell home furnishings, reflecting a recent slowdown in the housing market at US interest rates increase. Sales in the past few months may have been affected by hurricanes Florence and Michael, but it could not be determined how much they were affected. The holiday shopping season is gearing up to  be strong with the best labor market in decades and the record number of job openings is leading to higher incomes, giving households more ability to spend. There are some negatives on the horizon, however. Including, the stock market has fall, sharp drops from their record highs and the rising interest rates have hurt interest rate sensitive parts of the economy such as housing. Households have also dipped deeper into their savings to pay for their purchases, a trend that cannot go on indefinitely. The drop off in sales toward the end of the summer, especially on discretionary items such as eating out shows that Americans are unlikely to spend as much in the final months of 2018as they did in the spring and summer. The government reported sales fell 0.1%in September and August instead of rising 0.1% as initially reported. American shoppers returned in full force in October following a lull in the prior month that was due in large part to weather disruptions. Looking beyond the 0.8% surge in the headline retail sales; boosted by a price related rise in gasoline sales, there are signs that underlying spending growth has begun to slow. 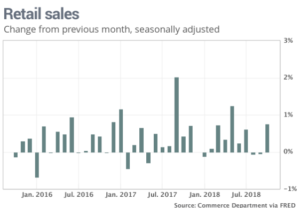 There was a split in directions between the Empire State and Philadelphia Fed manufacturing indexes, with the New York are gauge rising 2.2 points to a reading of 23.3 in November while the Philly Fed Index slid 9.3 points to 12.9; a three month low. A reading above zero indicate improving conditions.  The big difference between the regional manufacturing indexes came in new orders, which fell slightly in New York and more steeply in Philadelphia. Both gauges reflect that manufacturing executive were far more likely to report rising input prices than pass them on to customers. Manufacturers have been saying the same thing for a few months; complaining over rising prices from both tariffs or shortages of parts of labor, but still acknowledged that output has been solid. 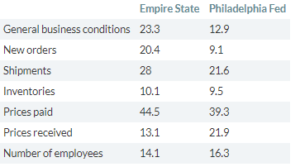 Industrial production rose just 0.1% in October, but from a stronger base than previously estimated on new numbers from the oil patch. Compared to 12 months earlier, the industrial production rose 4.1%. During October, manufacturing output rose 0.3%, mining output declined 0.3% and utilities output fell 0.5%. The soft October belied a big upward shift in production from the third quarter, now to estimated to have climbed 4.7% on an annual basis instead of a previously estimated 3.3%. That was mostly due to mining reaching an all time high in August, which really was about booming oil and gas production. Hurricanes lowered the level of industrial production in both September and October, but their effects appear to be less than 0.1% per month. In October, the index for business equipment rose 0.8% and the index for defense and space equipment gained 0.9%. Both indexes have posted five consecutive months of gains; helped by the big spending bill earlier in the year that ramped up spending for defense in particular. Motor vehicle assemblies slowed to a seasonally adjusted annual rate of 11.08 million after two strong months. Capacity utilization fell to 48.4% from an upwardly revised 78.5% in September. Surveys indicate manufacturers are worried about a number of factors, from tariffs to slowing global economy, but output still has been fairly strong. The question is whether the slow down in production since the peak in August will continue.