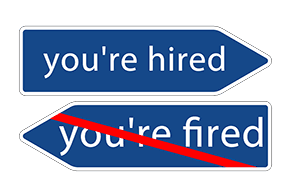 Posted at 14:36h in CCL Market Updates by admin 0 Comments

The PMI manufacturing index’s sample reported solid strength in September at a final 55.6 index, unchanged from the mid-month flash and is well above August’s level of 54.7. The sample posted strong orders in the month with growth centered narrowly in the domestic market; exports were flat due to concerns over tariffs. There is strong evidence of potential capacity stress as backlogs are building at a significantly high level; the fastest pace in two years. Input costs rose sharply, and component shortages were also reported; these rising input costs pass the higher prices through to the customers, as the “price pass” through to customers is described as “solid.” Despite the rise in backlogs, hiring in the month were the slowest in over a year.

The Institute for Supply Management reported that the manufacturing index fell to a reading of 59.8% in September from 61.3% in the prior month of August. Economists had forecasted only a slightly higher reading of 60.7%, as any reading above 50% indicates improving conditions, meaning the index remains still exceptionally strong. The readings of new orders fell 3.3% to a still strong level of 61.8%, while other indications of capacity stress are easing but only slightly, as both delivery delays and cost increases. At 66.9 remain heavy. Though the industries have worries concerning tariffs and rising prices, it appears output has been strong. As businesses are spending on machinery. Strong domestic demand, sustained by the rising wages, improved employment, and lower taxes have helped to continue the maintain the sector. Overall production rose 6 tenths t o63.9 for the strongest showing since January. The rate of inventory build eased slightly for both raw materials and finished goods. In contrast to the PMI manufacturing index, hirings in the sample for this index reported hirings as very strong at 58.8 for a 3 tenths gain from August; the strongest showing since February. 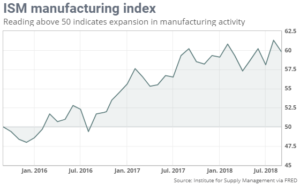 Construction expenditures were marginally up 0.1% in August compared to the previous month, July, as they were led once again by public sector spending. Spending in the sector was 2% higher than in July, while the private sector spending fell, decreasing 0.5% Housing was also weak as residential construction was reported to have fallen 0.7% in the month of August, offsetting the 0.2% gain seen in July. Compared to August 2017, construction was up 4.1%. The little strength in the report  was seen in both highway and street construction, as this sector was up 1.7% in the month. Educational spending was also up 1.0 percent. Unlike residential spending, the government spending was very active in August, up 5.9% at the Federal level and up 1.7% for state and local levels. Private nonresidential spending was flat, down 0.2 percent overall. The report missed economists forecast of a 0.4% increase, but revision to the three prior months were all upward. Overall the first three eight months of the year’s overall expenditures were 5.3% higher than during the first eight months of 2017. But, this report is not pointing to acceleration in business investment and is consistent with other weak quarter reports for residential investment, which continues to be the economy’s weak spot this year. 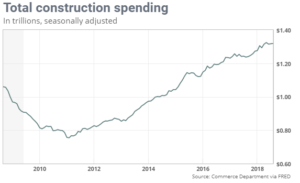 The US Services Purchasing Managers’ Index based on monthly surveys collected from over 400 US companies provide a leading indication of what is happening tin the private sector services economy. Easing optimism along with concern over the housing market helped to pull the services PMI index level to an 8 month low, ending September at 53.5 vs. 52.9 for the mid-month flash and 54.8 level in August. In the report, the year ahead outlook was described as “subdued” as it is predicted to be weighed down by concerns over competition. Current new orders managed to regain their momentum in September with backlogs up for the first time since June. Hiring in the sample group proved to be a positive indicator for the upcoming Employment report, as it is the strongest right now in four years. The ongoing effects of tariffs helped an increase in input costs with selling prices, as a result increasing to the strongest in the nine year history of this report. These results together with the manufacturing PMI index (above) was at 55.6 making for a composite score of 53.9 vs. the 53.4 calculated in September’s mid month flash. August had a final flash reading of 55.0. Today’s services report is mixed with concern over housing, but this dip in optimism is offset by the rise in new orders and hirings.

The Institute for Supply Management surveys 375 firms from numerous sectors across the US. It has four equally weighed components: business activity, new orders, employment, and supplier deliveries (also known as vendor performance). The first three components are seasonally adjusted, but the supplier deliveries index is not. For the composite index a reading over 50% indicates that the non manufacturing economy is generally expanding; while a reading below 50% indicates that it is generally declining. The ISM survey of nonmanufacturing firms climbed to a 21 year high of 61.6 for September from last month’s 58.5. It is the highest mark of the current nine year expansion and the second strongest reading in the history of the index which stretches back to 1997. All four components of the composite index score saw increases. The expanding markets boosted business activity for the sample as it jumped 4.5 points to 65.2. New orders increased 1.2 points to 61.6, while supplier deliveries lengthened one point to 57.0, lastly employment was up 5.7 points to 62.4 in a reading that points to strength in the upcoming employment report. 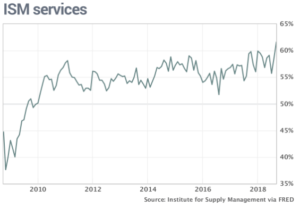 During the 60th Annual National Association for Business Economics Annual meeting in Boston, the Federal Reserve Chairman Jerome Powell, reminded everyone that the Fed is raising rates. He said gradual rate hikes are needed to hold down the risk of inflation. Pointing to the strong labor market as a possible source of inflation Powell believes there are no signs that inflation will spike. “Many factors, including a better conduct of monetary policy over the past few decades have greatly reduced… the effects that tight labor markets have on inflation,” stated Powell in a speech to the National Association for Business Economics during the annual meeting in Boston. When speaking of the labor market he continued on to cite the assessments of the Fed’s Beige Book, which imply that quality labor is in short supply. In response, he says policy will be balanced and move in moderation, that moving too fast and raising rates would raise the risk of shortening the current economic expansion but moving too slowly would raise the risk of inflation. He repeated that the outlook for the labor market remains strong and that inflation should remain low and contained, not rising much above 2%. His speech was mostly focused on the Phillips curve, a standard bank theory believed for decades. The Phillips curve states that slack in the labor market creates downward pressure on inflation and that tightness in the labor market creates upward pressure. The explanation being that employers push up wages to compete for scarce workers He noted that this relationship has unexpectedly broken down since the mid 1990s. Powell also went onto say banks are taking less risk and households are saving more while there is limited financial instability.  In an answer as to what the Fed would prefer to use to address the possible jump in inflation, Powell said raising the federal funds rate, in the Fed’s long established traditions, would be by far the preferred tool.

The number of Americans applying for unemployment benefits declined at the end of September and returned close to a 49 year low as the effects of Hurricane Florence faded. Initial claims, a rough measurement of layoffs, dropped 8,000 to 207,000 in the week ending in September 29th. Economists had predicted a higher reading of 213,000. The number of people already collecting unemployment benefits fell by 13,000 to 1.65 million, also referred to as continuing claims. The level of layoffs in the US is close to a half century low even though the population is much larger. Some economists point out it’s harder to qualify for benefits now than it was in the past. By almost any measure, the US economy is growing rapidly and poised for a strong holiday season at the end of the year. The latest employment report for August is predicted to show the economy is still generating plenty of new jobs that will eventually push the nations 3.9% unemployment rate or possibly lower. “The increase in jobless claims triggered by Hurricane Florence was very modest, and smaller than we expected,” said chief economists Ian Shepherdon. He continued, “It is now fading, and claims likely will hit new cycle lows, breaching the 200,000 mark for the first time since 1969. 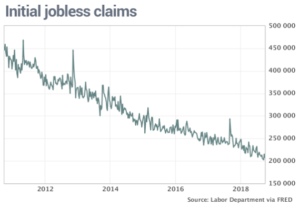 Factory orders represent the dollar level of new orders for both durable and nondurable goods. It gives more complete information that the advance durable goods report released earlier in the month. A monthly upswing for aircraft made for a 2.3 percent jump in August factory orders, this masks the general weakness otherwise seen in the report. Commercial aircraft orders surged 69 percent with defense aircraft up 17 percent. Excluding these tow factors as well as the gains seen in ship and boats along wit the 1.0 percent rise in motor vehicles, factory orders in August managed only a small 0.1 percent gain. The split between durables and nondurables shows the former, again was inflated by aircraft expenditures, was at 4.4% (revised form last week’s advance reading of 4.5%) and the latter up 0.2 percent but again follow the strong prior gains in beverages and paper offset weakness everywhere else. The major negatives in the report are in the core capital goods (non defense, ex-aircrafts). Orders here fell 0.9% In August and reflect gains through the transportation group and metals groups where tariff related pre buying is likely in play. Total inventories fell 0.1 percent but like most other readings follow gains in prior months. August may have been a good month for transportation equipment but it really was mostly flat the whole time for manufacturing as a whole.

The Employment report mixed results that keep expectations for Federal Reserve policy in line, September payroll growth wasn’t as strong as had been expected but the unemployment rate went down; while August got a big revision upward. Nonfarm payrolls rose a lower than expected rate of 134,000 which is still respectable, but much lower than August’s revision of an additional 69,000 to a level of 270,000. Wage indications from average hourly earnings rose an as expected 0.3 percent for a yearly rate of 2.8 percent, this is 1 tenth below expectations. Looking deeper into the Payroll data, manufacturing added a stronger than expected 18,000 in September along with a revised plus 5,000 in August vs. the initial estimate of minus 3,000. Construction added a stronger than expected strong  23,000 and mining, perhaps the strongest of any industry was up 5,000 which is very strong considering the sector’s size. Trade and transportation, where conditions are very tight due the strong demand, increased 8,000 following a much larger 55,000 surge in August. Professional  and business services rose a very strong 54,000 with the subcomponent of temporary help up a solid 11,000, both of these gains are indications that employers are scrambling to fill positions. On the other hand, a sector that did not increase was retail which declined 20,000 payroll job. The key is that wages are showing steady but not accelerating pressure. Average hourly earnings rose an as expected 0.3% in the month for a yearly gain of 2.8%. The monthly revision to August was down one tenth to 0.3 percent, this is favorable for those in the Fed worried about wage inflation. 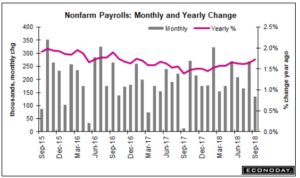 The unemployment rate fell 2 tenths to 3.7 which, in contrast to the negative payroll growth, is stronger than expected and at a 49 year low. This reflects yet another drop in the number of people actively looking for jobs, now at 5.964 million and well down from 6.235 million last month in August. 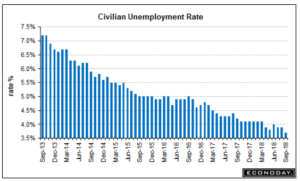